Productivity is a bit like cleanliness: hard to argue against. “Could you be a bit less productive?” qualifies as sarcastic praise. But like cleanliness, you can have too much of a good thing. In the shadow of a viral pandemic we’re all well briefed on the importance of infection control, but the right amount of exposure to dirt is still, paradoxically, a boon to the immune system. Just as the right amount of idling could be vital to a healthy way of life.

The great upheaval of the Covid19 outbreak could have dramatically divergent consequences on our working lives depending on the lessons we learn from it. One set of voices points to the economic damage caused by the lockdown of daily life, wrings its hands and speaks of the urgent need to return to normal, possibly with even harsher austerity and aggressive deregulation triggered by the scale of public financial support given to businesses and workers.

But other voices say that the crisis reveals exactly the opposite – our latent potential to rapidly change how we live, work and behave, and the possibilities to fundamentally rethink the economy. The cost of living is what keeps many people shackled to long hours serving a growth-addicted system. But in lockdown, many of those who can work from home have been liberated from things like the expensive and life-sapping commute. People quickly adapted to the idea that a lot of moving around was so much “unnecessary travel”. More widely the notion of focusing just on “essential goods and services” has simplified things and cut much superfluous and environmentally burdensome consumption.

In its place has emerged a flourishing patchwork of homemade entertainments, making, baking and reconnecting socially online, including singing in community choirs. Importantly, a new awareness has grown of the role played by key workers. The very opposite of the jobs that normally get all the attention (City workers, publicity-hungry CEOs and celebrities), the occupations that now draw our applause (many of them poorly paid) are the health and care workers, the people who keep public transport going, those who clean and maintain our neighbourhoods, and the shop workers who stack shelves with food.

Things have flipped, and almost the last concern is how to make more general stuff to fuel debt-financed consumerism. If anything the focus has been on how to switch manufacturing from more frivolous matters to important things like medical and protective equipment. Hence brewers have been producing hand gel, fashion labels switching to medical gowns and even Formula 1 engineers taking on the challenge of making breathing aids. But the siren call to hurry back to the old, unequal, environmentally destructive “normal” is strong, and its drum beat is the insistence on increasing productivity.

However, getting under the skin of why productivity – what all modern economies strive for – might not always be a good idea requires a little more effort. To virtually all economists and commentators it seems innately good.

Yet, as is often the case, that which claims to be the height of common sense often turns out to be a far more recent invention, and typically is found in the service of a certain set of interests and a particular order. The idea of economic growth, still promoted today as a kind of panacea for all society’s ills, was only invented as a national accounting device in the 1930s, and didn’t become a political obsession until much later.

The notion of productivity has a longer history, but not much. You might think it had been common currency for at least as long as there have been tax-hungry monarchs and wealth-accumulating corporations. But if you search the written record, the term barely registers in published English until around 1890. It then enjoys a fairly meteoric rise in popularity peaking in the mid-1980s. (By contrast, references to “idling” have been in use for centuries.)

Given that productivity is about getting more from less, it shouldn’t surprise anyone that the term is joined at the historical hip with capitalism. 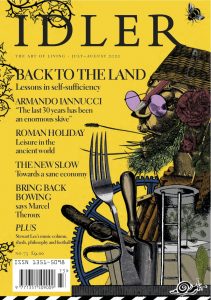 This is an extract from an essay which appears in the print edition of Idler 73, July/August 2020. Click here for stockists.