Darwin’s ideas about the female of the species reflect the misogyny of his era, says Lucy Cooke, and are simply untrue


It’s fair to say that if Darwin was a contestant on Mastermind, his specialist subject would not be the opposite sex. Here was a man that married his first cousin Emma, only after drawing up a list of nuptial pros and cons. This revealing romantic inventory, scribbled on the back of a letter to a friend, has, to Darwin’s shame, been preserved, revealing his most intimate thoughts for all to judge in perpetuity.

In just two brief columns – “Marry” and “Not Marry” – Darwin thrashed out his inner connubial turmoil. His chief concerns were that he would miss out on the “conversation of clever men at clubs” and might therefore succumb to “fatness and idleness”, or worse, “banishment and degradation with indolent idle fool” (which is perhaps not the way Emma would have chosen to be described by her beloved fiancé). However, on the plus side, he would have “someone to take care of the house” and a “nice soft wife on a sofa” was “better than a dog anyhow”. So Darwin bravely took the plunge.

One gets the feeling that, despite fathering ten children, Darwin was perhaps driven by cerebral rather than carnal urges. He may not have been terribly familiar or even curious about the female sex. So the chances of him questioning evolution from the female perspective, as well as the male, were perhaps small, even before you consider the society into which he was born.

Even the most original and meticulous scientists are not immune to the influence of culture, and Darwin’s androcentric reading of the sexes was no doubt shaped by the prevailing chauvinism of the era. Women in upper-class Victorian society had one main role in life: to marry, have children and perhaps assist with their husbands’ interests and business. This was very much a supportive, domestic role since they were defined, physically and intellectually, as the “weaker” sex. Women were, in all ways, subordinate to male authority, be they fathers, husbands, brothers or even adult sons.

This social prejudice was conveniently substantiated by contemporary scientific thinking. The leading academic minds of the Victorian era considered the sexes to be radically different creatures – essentially polar opposites of one another. Females were believed to experience arrested development; they resembled the young of their species by being smaller, weaker and less colourful. Where male energy goes into growth, female energy is required to nourish eggs and carry young. Because of males’ generally larger physique, they were considered to be more complex and variable than females, as well as superior in mental capacity. Females were considered to be all of average intelligence, but males varied wildly to include levels of genius unseen in the opposite sex. Essentially, males were considered to be more evolved than females.

These sentiments were all incorporated by Darwin into The Descent of Man, and Selection in Relation to Sex, which, as the title suggests, used sexual and natural selection to explain human evolution and the sex differences upheld by Victorian society.

“The chief distinction in the intellectual powers of the two sexes is shewn by man’s attaining to a higher eminence, in whatever he takes up, than can woman – whether requiring deep thought, reason or imagination, or merely the use of the senses and hands,” explained Darwin. “Thus man has ultimately become superior to woman.”

Darwin’s theory of sexual selection was incubated in misogyny, so it is little wonder that the female animal came out deformed; as marginalised and misunderstood as a Victorian housewife. What is perhaps more surprising, and damaging, is how tough it has been to wash this sexist stain out of science, and how far it has bled.

Darwin’s genius has not helped. Because of his godlike reputation, biologists who followed in his wake have suffered from a chronic case of confirmation bias. They looked for evidence in support of the passive female prototype, and saw only what they wanted to see. When faced with anomalies, like the licentious promiscuity of the female lioness that enthusiastically mates hundreds of times a day during oestrus with multiple males, they studiously looked the other way. Or worse, as you will discover in chapter three, experimental results that didn’t conform were manipulated with a statistical sleight of hand to conjure sideways support for “the correct” scientific model.

A central tenet of science is the parsimonious principle, also known as Ockham’s razor, which teaches scientists to trust in the evidence and choose the simplest explanation for it, as it will probably be the best. Darwin’s strict sex roles have forced an abandonment of this fundamental scientific process as researchers are compelled to dream up ever more torturous excuses to explain away female behaviours that deviate from the standard stereotype.

Extracted from Bitch: A Revolutionary Guide to Sex, Evolution and the Female Animal by Lucy Cooke (Transworld). Buy a copy here.

Join us for A Drink with Lucy Cooke on Thursday 3 March, 6pm GMT. £7.50; free for subscribers. Click here to find out more.


Subscribe to the Idler here and get 26% off the cover price plus a free copy of An Idler’s Manual. 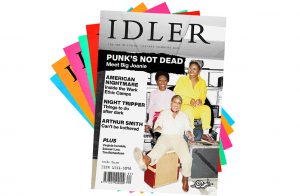 A Drink with Lucy Cooke, author of Bitch

Lucy Cooke on the amazing sloth

The BBC zoologist defends the much-maligned sloth, the slowest but cutest of animals… Read more

The Birthplace of Democracy and Theatre

Harry Mount on the miracle of ancient Athens… Read more

A glorious week of fun and rest in Italy… Read more

Disappointments of the Bohemian Parents