We at the Idler were so sorry to hear about the death of the great botanist, forager, writer, photographer and gardener Roger Phillips. We’d hung out with him and his wife Nicky Foy many times at the Good Life festivals in Hawarden, and only about a year ago Victoria and I sat with him and Nicky in the London square whose garden he designed, eating cheese and drinking wine. He wore a red beret and was often to be seen in a Paul Smith shirt decorated with mushrooms. He was 88.

Roger was a legend in my life way before I met him. One of the first things I did when we moved to Devon in 2002 was to order copies of his various foraging and wild flowers books. I loved his book Wild Food and pored over the pictures and the text with the same excitement as the teenage me had pored over Clash album covers. We followed his directions for making parsnip wine, I seem to remember, and there were great pictures of a rubber tube emerging from a tree trunk, collecting sap I suppose. Thanks to him we started eating wild garlic and sorrel and the like.

Roger was an ad man before turning to photography, having worked as Creative Director at Ogilvy and Mather. According to Horticulture Week magazine, he deliberately set out to create a collection of books on plants as diverse as mosses, roses and annuals. His first book Wild Flowers of Britain was a huge success, selling 400,000 copies in the first year.

He went on to write over 30 more books after that, including The Worldwide Forager in 2020, and became especially famous for his work on mushrooms. He could go into the woods at the Good Life festival and return with a huge array of brightly coloured and edible fungi – and a trail of adoring fans.

He was Honorary Garden Manager at Eccleston Square in London and in 2010  was awarded the MBE for services to London Garden Squares. This all means that anyone wanting to honour his memory has a range of choices: he created a real live living garden plus a pile of brilliant books (he also made a wonderful online foraging course for the Idler Academy, and appeared as a guest on A Drink with the Idler in June 2020). 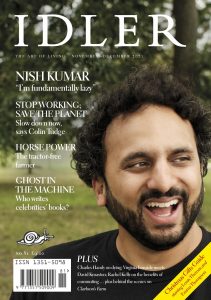 A guide to edible mushrooms, flowers, roots and more from the legendary godfather of foraging… Read more

New: How to live in the country

A Handbook for Happiness… Read more