Tom Hodgkinson with some philosophical reflections on bustling about


August is upon us and it’s time for Idlers to go off on holiday. Actually holidays are a slightly vexed subject for me. Of course I understand why people go on them. They like getting away, getting some heat, getting some idle time, eating outdoors, swimming and all the rest of it. I’m going on holiday myself and will be abroad for most of August. And I’m looking forward to it.

But, but… sometimes I think I’d just like to stay at home in Shepherd’s Bush and read and write and play tennis all day and drink beer under the evening sun which, after all, shines both on Shepherd’s Bus and on the south of France. I would save a fortune and in addition would avoid all the unimaginable toil, delay, humiliation, powerlessness, meek submission to authority and stress involved in travelling.

So when, in Paris, in 1953, the Situationist philosopher Guy Debord scrawled “ne travaillez jamais” on a wall in the Rue de Seine, he was clearly recommending not only that freedom-seekers and Epicureans should attempt to avoid conventional employment, but also reject the slickly-advertised allurements of travel and tourism.

But there we have it – it’s the curse and joy of humanity! We like to move, shake, we like to create, we like to bustle. The Situationists were of course not the only philosophers to have approved of inactivity. There is Pascal’s famous pro-idling Pensées, first published in 1670:

“Sometimes, when I set to thinking about the various activities of men, the dangers and troubles they face at court, or in war, giving rise to so many quarrels and passions… I have often said that the sole cause of man’s unhappiness is that he does not know how to stay quietly in his room.”

Before him there were the Cynics in ancient Athens. They avoided work. And Christ famously advised against going on holiday: “Consider the lilies of the field, they travel not, neither do they spin.”

Evelyn Waugh said something similar. It’s the authorities’ desire to fuss about that causes the issues. “If only politicians and scientists were lazier, how much happier we would all be.”

But we don’t sit quietly rooms, or blow about in the wind like lilies in the fields, or very few of us do. We have a mad Dickensian urge to bustle about, despite all the logical arguments against pointless activity.

I’m going to heed my own advice and take a break from this weekly newsletter. I will resume normal service on the first of September.

And whether you go away on holiday or stay at home, I hope that August will provide you with lots of idle hours. Thanks for being there.

Idler No85 – out now! Don’t forget, you can now buy the Idler in your local bookshop. We’re also available in larger branches of WHSmiths, Waitrose, Booths and Easons. 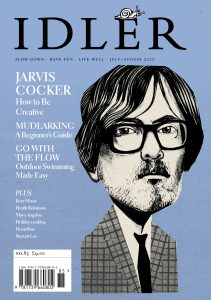