THERE’S a certain kind of violent, shocking laugh that you didn’t know was hiding inside you until you see a Modern Toss cartoon. They make me erupt. I have one of their mugs, I bought my mate Jamie their Periodic Table of Swearing as a wedding present and last night at the opening of their exhibition in East London I spent £100 on posters to put in the office of the business I now run. One of them from the ‘Work’ series is going in our Boardroom. Ten people wearing ties are sitting around a table. One of them says ‘Here’s an idea, why don’t we just do stuff that’s going to be really massively successful’. Genius.

Modern Toss began in 2004, the same year we at the Idler did Crap Towns as part of our website. Jon and Mick of Modern Toss were part of the original team that launched Loaded magazine, that itself started life in 1994 – the same year Tom and Gav launched The Idler. Back in those days we watched them in awe while they made wheelbarrows full of money. Of all the magazines around at the time I think Loaded and The Idler are the only two left. The Face, and many others, are now long gone. I remember having an Idler editorial meeting in a bar back in the late nineties when James Brown came over to say hi to Tom. When he found out we were having an editorial meeting he shouted to all of us ‘MORE TITS!’ We did have Jo Guest on the cover at one stage, but in typical Idler fashion she was fully dressed in the role of Guinevere (I think).

Crap Towns started when we invited readers of the Idler website to write in about their hometowns in 2003. The only rule was that to call a town crap you had to live there yourself and the site literally collapsed under the weight of the traffic. The book that appeared a year later sold very well. It upset lots of people and Sam and I got to appear on Channel Four News, where Simon Jenkins and Iain Sinclair argued over the merits of our book. Jenkins dismissed it out of hand: “It has schoolboy written all over it!” Michael Howard M.P. came to the defence of Hythe though, and Joe Strummer got cross about what we said about Bridgewater. It was hilarious. “Schoolboy” was right though. We didn’t care. We were indignant and rude. Deliberately so. In the Idler office Tom always used to talk about remembering the spirit of Punk. It doesn’t matter if it’s not perfect, just get on with it.

2004 was the year after the Iraq War. Blair’s Britain was growing economically and there was a clear stench of smugness in Middle England. Balloons of self-satisfaction needed to be popped. That was the year Modern Toss also emerged with a similar spirit. Crap Towns was an attempt to make people laugh and think about urban deprivation, Modern Toss was just fucking funny.

Last year Crap Towns had its own ten-year anniversary. We needed some cartoons for another book and luckily for us Jon and Mick from Modern Toss were up for it. Their cartoons were the best thing in CT2. It was good to see them in our pages. Crap and Toss finally came together. 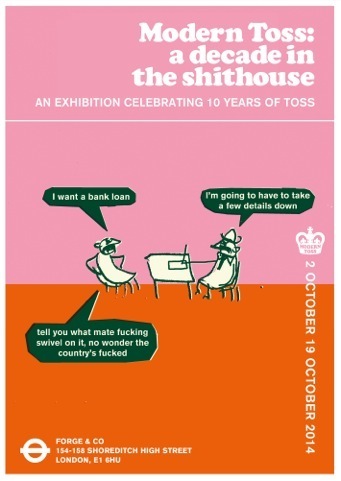 Jon and Mick are now celebrating a decade of their own with the publication of A Decade In The Shithouse. The exhibition that opens today shows the range of what they’ve done over the years. They started as a fanzine and have now raised £55k on Kickstarter to fund their own book. It’s a heavy, full colour tome. In between they managed to pull off a TV series for Channel Four, countless exhibitions and their cartoons are now regularly seen in the Independent and Private Eye. The Eye is the perfect place for them. You can imagine the spirit of Peter Cook guffawing over Mr Tourette.

Dan Kieran is the CEO and co-founder of the award winning publishing platform unbound.co.uk. For many years he was Deputy Editor of the Idler. He also writes books including, most recently, The Idle Traveller.

You can visit the Modern Toss website here: www.moderntoss.com